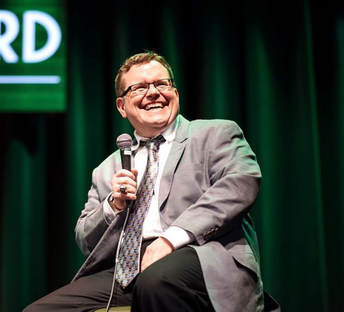 A fixture among broadcasters in Washington, D.C., Dan Laing is an on-air personality at SiriusXM Radio, and play-by-play broadcaster on Stadium.

Laing has been the "Voice of American University" for over a decade. Laing handles play-by-play for men's and women's basketball and volleyball.

Aside from his duties in the broadcast booth, Laing is the host of AU Hoop Talk with Mike Brennan, the master of ceremonies at the annual AU Athletic Banquet and mentors student looking to break into the broadcast industry.

​From 2004-12, Laing was an anchor at WTOP, the top-rated radio station in Washington, D.C.
​
Throughout his career, Laing has had a wide range of experiences in the broadcast industry. He's had the privilege of covering Tony Gwynn's 3,000th hit, Mark McGwire's 500th home run, three Baseball Hall of Fame Induction Weekends, numerous baseball postseasons, the Roger Clemens perjury trial, the evolution of college football to its current playoff format and a Super Bowl.  Laing has spent time in minor league baseball, serving as the play-by-play voice of the Myrtle Beach Pelicans, the Potomac Nationals and currently with the Bowie Baysox.
​
Prior to those experiences, Laing was a senior producer for the then-Florida Marlins Radio Network working with Ford C. Frick award winner Dave Van Horne, Dave O'Brien, Jon Sciambi and Joe Angel.

A 2001 graduate of the University of Miami, Laing cut his teeth as the Sports Director at 90.5 FM WVUM. He announced numerous Hurricane athletics events, including baseball, football and basketball games.  He even called the 1999 and 2001 College World Series championships and the football team's upset of #2 UCLA during the 1998 season.

Away from the sports world, Laing has many interests including travel, dining out and collecting baseball memorabilia and art.  He has traveled to over thirty countries with ​standout experiences including trekking in Nepal, skiing in Switzerland, and going on safari in Kenya.

Laing was born in San Diego before his family moved to Chambersburg, Pennsylvania. He currently resides in Washington, D.C.
© 2019  Dan Laing